26 unique perspectives that will take you deep into the ethos of the US Submarine Force.

Nashua, NH – USA | August 24, 2021 — The Silent Service Remembers (Vol. 2) is our fifth effort in the ever-expanding series of books that seek to capture the essence of the US Submarine Force. Featuring the stories, reminisces, and photographs of 26 authors, the volume represents the sequel to the first volume published in 2020 to nearly exclusively five-star reviews on Amazon. 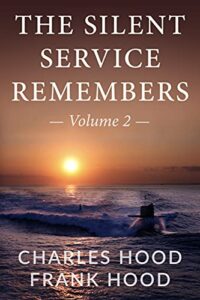 From WWII to The War on Terror – “The Silent Service Remembers (Vol. 2)”

– The words of actual submarine veterans take you into a WWII sub being depth-charged. Or into a ballistic missile sub where crewmen thought they would launch – for real. Or under the Arctic ice cap with nowhere to surface. Plus dozens of more exciting and true stories written by the men who bore witness to them.

Inside this book, the many tales will make you laugh, cry, shake your head, and ponder. Along the way, you will learn a little about the core foundations of this proud group of intrepid sailors who volunteered to serve aboard submarines in the defense of the United States.

Painstakingly assembled over a year’s time with great care and featuring a handsome layout that is easy on the eyes, The Silent Service Remembers (Vol. 2) is the perfect read for the submarine veteran or aficionado. At nearly 650 pages in length and containing over 150 vintage photos with captions, this volume will entertain and enlighten the reader for many hours.

The other books by the authors, brothers Charles and Frank Hood, provide a wealth of other information about the US Submarine Force—all true, but none classified—that help the reader to further appreciate the historical importance of this elite group. These titles are Poopie Suits and Cowboy Boots, Sub Tales, More Sub Tales, and, of course, The Silent Service Remembers (Vol. 1).

The authors recognized in 2017 that there was a general lack of submarine books that could appeal to both the old salt and the novice reader. Their books are intended to fill that gap and appeal to a wide audience.  All titles in this series are clearly written and carefully vetted by dozens of submarine veterans for accuracy.  Moreover, the books collectively aspire to convey a real sense of the hopes, fears, and motivations of the men (and now women) who call themselves submariners.

Finally, the authors embarked on this journey by aspiring to raise money for the Charitable Fund of the United States Veterans, Inc., the largest submarine veterans’ group in the US with more than 13,000 members. To this end, all proceeds from books sales were donated to this worthy cause until the ambitious goal of $50,000 was reached in May 2021.

We have striven to write this book in a way that appeals to both the career Navy man/woman and the interested civilian. You will learn a lot about the Silent Service, and our hope is that you also come away with a great deal of respect for the men and missions that continue to this day with no fanfare and little public awareness.

Poopie Suits is a self-publishing group of two brothers, Charles and Frank Hood, who started by detailing Frank’s submarine service during the late 60’s to early 70’s. Each book is richly detailed and clearly written in language that anyone can understand. None of them touch on any classified information. Four of the books are listed in the “Top 100 Cold War Books” by Amazon (including the new release). This is a real-time list, so the positions change every day: https://www.amazon.com/gp/bestsellers/digital-text/10332432011/ref=pd_zg_hrsr_digital-text

Also two of the books are listed in the “Top 100 Submarine Books of All Time” by The Book Authority – https://bookauthority.org/books/best-submarines-books

The U-Boat was located by the Schurmann Family in July 2011. Almost one year after locating the submarine, the Schurmanns joined efforts with deep sea diving experts to collect images of the U-513. With specialized technology, using a remotely operated underwater vehicle (ROV) the expedition made a 135 meters dive to film and take pictures of the wreck, for the first time in history.

“After years of research, finally we watched this historical moment. We first saw a shadow then gradually the images became very clear, the submarine is almost intact and whole as if she was placed there to sleep” said Vilfredo Schurmann leader of the expedition.

“The ROV (Remotely operated underwater vehicle) did several dives and with every new image we celebrated this great feat” says David Schurmann, the film director.

It all began in 2001 aboard their sailing yacht “Aysso”, when the Schurmanns a well-known sailing and expedition family in Brazil, was told of the story of a German submarine, sunk in 1943 during WWII in the waters of Southern Brazil.

Vilfredo and Heloisa Schurmann where hooked on the mysterious story and started researching the facts in the National Archives in Washington – USA, Berlin – Germany and in Rio de Janeiro – Brazil.

They were granted a license from the Brazilian Navy, and obtained the support of the Santa Catarina Government and UNIVALI University and were sponsored by TOTVS, CPE (Coastal Planning & Engineering) and FUGRO BRAZIL to further the search.

A team of 35 professionals (all volunteers) which included divers, oceanographers, retired officers from the Brazilian and USA Navy & Air Force, archaeologists, historians, filmmakers and the last surviving member of the USA airplane responsible for the U-boat sinking aided on the search.

After 2 years and 18 expeditions at sea, operating Side Scanning Sonars and Magnetometer, on July 17th 2011 on board their adapted sailing yacht “Aysso”, the Schurmanns located the exact position of the sunken submarine.

On March 8, 2012, aboard two ships, the expedition led by Vilfredo Schurmann and a crew of 20, filmed for the first time in history since her sinking 68 years ago, images of U-513. The U-boat is considered one of the WWII submarines sunk furthers away from Germany during battle.

THE UNDERWATER FILMING
The underwater footage of the U-513 was made with a ROV model Sea Eye Falcon Marine, capable of operating up to 300 meters deep, assigned and operated by FUGRO BRAZIL.

S/V “Aysso” and M/V “Thunder” anchored at the location, launched the ROV (Remotely operated underwater vehicle) and with sonar-aided navigation (similar to a ship’s radar – working under water) located the submarine.

The recordings were performed with the ROV camera itself. For best results, HD 3D cameras were also mounted in housings to captured images of the submarine.

HISTORY
The U-513, under the command of the German captain Karl Friedrich Guggenberger, had the mission to sink any enemy vessel on the route between Buenos Aires and Rio de Janeiro. She had already torpedoed three ships, including two Americans and a Brazilian.

The U-Boat-513 sank on July 19th, 1943. Lieutenant Roy S. Whitcomb was on a PBM-VP-74 flying-boat bomber on an antisubmarine sweep and spotted the surfaced U-boat. He ordered the attack. Captain Guggenberger on the deck of the submarine saw the approaching plane, he knew there was no time to submerge and began a counterattack. Whitcomb’s dropped six 225-pound bombs depth charges and the U-boat absorbed the full impact on her hull.

The U-513, 76 meters in length sunk immediately with its 46 crew. 7 men who were on deck where the only survivors, among them the captain Guggenberger.

In 1984 Vilfredo, Heloisa and their children left their home, their work and school and set off from Florianópolis, the capital city of the State of Santa Catarina, in southern Brazil, to pursue their dream: circumnavigate the world on a sailing yacht.

Their children, Pierre, David and Wilhelm, were 15, 10 and 7 years old. On this first adventure, the Schurmann Family spent 10 years at sea.

In 1997 the Schurmann Family began their second great adventure Magellan Global Adventure. The goal was to retrace the route sailed by Ferdinand Magellan’s fleet, the first complete circumnavigation of the planet. For this adventure, apart from the parents only their son David Schurmann and Kat, their 5-year-old daughter went along. Magellan Global Adventure was followed by more than 1,5 million people, from 44 countries. Every month the adventure’s filmed reports, broadcast internationally, had an average of 40 million television viewers in Brazil and many more around the world. After 30 months, the Schurmann’s yacht returned to Brazil.