Bengaluru, India, September 22nd, 2016 — The Prestige Group, one of India’s largest developers is all set to celebrate a special milestone in the history of the company. To commemorate their 30th year in the business, Prestige will be hosting its first-ever solo expo, showcasing their entire collection of on-going as well as upcoming properties across South India. Over 50 developments across 5 cities being Bangalore, Mangalore, Hyderabad, Chennai, and Kochi will be showcased at 1 location – ITC Gardenia.

The expo will include a wide range of projects, including mid-segment, premium, and luxury housing. Given that Prestige is one of the pioneers of luxury housing in South India, there will also be a separate Premium Lounge, dedicated exclusively to showcase all their luxury projects.

Commenting on the occasion of this milestone, Mr. Swaroop Anish – Executive Director, Business Development, Prestige Group said, “India, today is living the growth story. The property market itself has witnessed a revolution with certain consumer-friendly laws coming into effect, decreasing home loan rates, and attractive payment plans; all contributing to an increase in demand, for quality homes.”

“Over the last 3 decades, brand ‘Prestige’ has grown to become one of the most trusted and aspirational brands in the country. Today, homebuyers aspire to buy Prestige homes as we have succeeded in consistently giving a strong return on investment on all developments till date, apart from providing the highest standards of living to thousands of satisfied homeowners.”

“Given the company’s presence across diverse sectors, the Prestige Group is one of the prime movers in the mid-segment to premium, and luxury real estate space. Keeping this in mind, we came up with the concept of ‘KEYS’ – as a tribute to the thousands of keys that we have handed over to our customers till date. I invite all aspiring homebuyers/investors from across South India, to come and make the most of this event.”

Interested buyers will get the benefit of special offers during the expo. Additionally, customers also stand to win exclusive gifts and privileges throughout the three-day event. 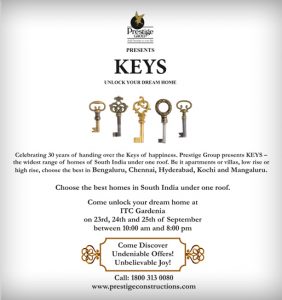 About the Prestige Group:
The Prestige Group has firmly established itself as one of the leading and most successful developers of real estate in India by imprinting its indelible mark across all asset classes. Founded in 1986, the group’s turnover is today in excess of INR 4,700 Crore (for FY ’16).

Now, with over 150 landmark developments across Bangalore, Prestige has extended its expertise to all major cities across South India making them the only developers in the region to boast of such a widely distinct portfolio.

Prestige Group is the only developer from Bangalore to receive the reputed FIABCI award for their software and residential facilities. At the Asian Brand Conclave this year, Prestige Group was awarded the “Admired Brand of Asia” in the category of Real Estate while Mr. Irfan Razack was chosen as the “Admired Leader of Asia 2014-15”. Among other laurels, the company’s Investor Relationship (IR) Programme, was ranked as Second Best in Asia and the Best in India by the Institutional Investor (II) magazine’s 2014 All-Asia Executive Team Rankings. Prestige is the only CRISIL DA1-rated Developer in India and was recently awarded the financial rating of ‘A-‘ by ICRA. They have also won a plethora of international and national awards over the last decade, across categories, including the Asia Pacific Property Awards, Asia Pacific Hotel Awards, Cityscape Awards, Indian Realty Awards, Srishti Good Green Governance Awards, Pevonia Asia Spa Awards, Builder’s Association of India (BAI) and Confederation of Real Estate Developers’ Associations of India (CREDAI) Awards, amongst others.

Mirabile MD, the leading health and wellness center encourages everyone to sign up for their Medi-Weightloss programs to maintain a healthy weight. Their weight loss program is offered in three phases and provides all the necessary tools required to lose weight.

A spokesperson said, “Our medical professionals prescribe a program for you based on your lifestyle and your medical history. The combination of our exclusively formulated signature supplements, vitamin and mineral based injections and FDA approved prescription appetite suppressants work together to enhance your metabolism, manage appetite and keep you feeling great during your weight loss process.”

According to an analysis based on the survey of the Centers for Disease Control and Prevention’s Behavioral Risk Factor Surveillance, the adult obesity rate of the Kansas State lies at 34.2 on a scale of 1 to 51, with 1 being the lowest rate of adult obesity and 51 being the highest. The company’s medical professionals will work closely with their patients to make sure the intended results are achieved in time.

“Our weight loss program is offered with a difference. We balance education, appetite management, and activity to lose weight. Our patients will also learn strategies to keep weight off using real food. Our program isn’t a mere quick fix to resolve obesity problems, but we help you adopt a lifestyle that is balanced and healthy,” said the spokesperson.

Mirabile MD was founded by James Mirabile, MD who is well respected among patients and colleagues for his work in obstetrics, gynecology, medical cosmetics and medical weight loss and bio-identical hormone replacement therapy in the Kansas City metro area.

“We provide our services for men and women throughout Kansas City. On average, Medi-Weightloss patients lose 7 pounds the first week, and then, 2 to 3 pounds each week thereafter for the first month. Our weight loss program is safe and actually works than other conventional and potentially unsafe weight loss methods,” said James.

Mirabile MD is one of the recognized health and wellness centers in Kansas City offering weight loss, cosmetic and wellness treatments with advanced technology. For more details, visit http://www.mirabilemd.com/