The Mayor of Chualar, author and advice columnist Veni, has released the follow-up to her popular first book “Veni, Vidi, Vici: I Came, I Saw, I Conquered,” with the new “Born to Lead.”

Chular, CA, September 20, 2018 — The Mayor of Chualar, author and advice columnist Veni, has released the follow-up to her popular first book “Veni, Vidi, Vici: I Came, I Saw, I Conquered,” with the new “Born to Lead.”

Veni, a Pumi Hungarian herding breed now 6 years old, continues to recount her adventures in America with “Born to Lead,” including her stint in county jail, running for President of the United States, starting a “Dear Veni” advice service for dogs, suing her dad’s surgeon, and finally, getting voted mayor of the small community of Chualar, California, where she lives with her parents Pam and JJ Jackson.

Veni was elected mayor of Chualar on Jan. 14, 2017, which she called the “best day a doggie could ever have.” She quickly assembled a cabinet that included Johnnie Collieran as Attorney General, Tippy the terrier as chief of police, Princess was named cabinet advisor and chauffer, Harley, a Yorkie, was named secretary of defense, and Louie became secretary of agriculture.

“I like it better than the first book,” says Veni’s parent and ghostwriter Pam Jackson. “I like this story, it’s really a storybook. It’s a fun book.”

After a rough first year that Veni describes in “Veni, Vidi, Vici,” in which her housemates Levi, another Pumi, would tease her mercilessly, and Demi, a standard poodle, who hated her from the start, as well as getting used to a new home and new parents in a foreign land — rural Chualar — Veni has settled into her new life and then some. She’s become a star in her own right.

“Veni, Vidi, Vici” also features a collection of letters from Veni to her Aunt Aurora back home in Hungary as well as letters to and from admirers and pen pals, including a few “boyfriends.”

Veni also recently attained an achievement award from AKC in which she won titles in herding, tricks (in which she had to do 10 different tricks), and canine good citizen.

“We are very proud of her. Canine good citizen was difficult for her because she is shy, but she did it!” says Jackson.

Jackson has been a dog trainer for more than 30 years, which gives her unique insight into how Veni thinks and acts.

“I love dogs and I love people, I become their psychologists,” she says about her profession as a dog trainer. “I’ve met a lot of interesting people in my life working with dogs. I work with 12-15 dogs per week, I have a good reputation and lots of referrals. It’s fun.”

She has trained several thousand dogs, including two different dogs who starred in the productions of the play “Annie”, and her own standard poodle, Charley, who played “Charley” in John Steinbeck’s “Travels With Charley.”

She and her husband adopted nine-week-old Veni on a trip to Venice Italy in 2012, thus the name Veni, short for Venice.

Born in Seattle and raised in Tule Lake, California, Jackson and her husband (who is from Klamath Falls, Oregon) have two grown sons in addition to the furry children. Her husband is a produce broker in Salinas and have lived in Chualar for 31 years.

“Veni, Vidi, Vici” has received 4.5 out of five stars (80% five-star) in reviews on Amazon.com. Kirkus Reviews writes, “Veni is larger than life, and her voice makes for fun reading,” while a five-star review on Amazon says, “Such a fun book! I loved the part about her ‘mother’ being a dog trainer and had to hire a trainer for Veni. Veni is obviously very strong-willed. I thoroughly enjoyed reading this book and hope Veni will share more of her adventures in the future.”

Well, the future is now. “Born to Lead” is available in both hardcover and paperback, and “Veni, Vidi, Vici” is available in paperback only, all are autographed, on Jackson’s website, http://pamjacksondogtraining.com (it is also available on Amazon.com). And Veni and Jackson are already hard at work on a third book, which will be about her adventures as a private detective. Veni and her doggie friends travel all over the world solving problems.

Salinas, CA, September 20, 2018 – This conference is designed to introduce useful tools to implement the innovative concepts of wellness & recovery. Participants also have the ability to view works of art created by consumers of mental health services. This is our 10th year of providing trainings and techniques that can be an asset on the road to recovery. 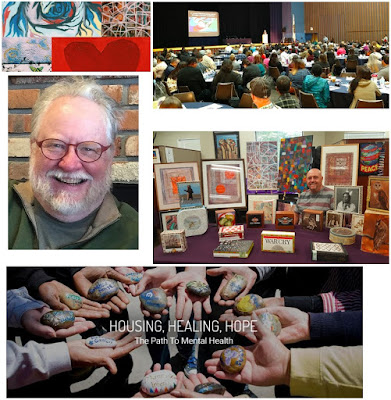 The use of stories has always been a foundational practice in healing and advocacy conversations. Now, with mental health services expanding beyond clinical services and including recovery, housing, employment and other community based activities, it is necessary to re-evaluate how professionals, advocates, and the people they serve can use stories in additional ways. This training is designed for professionals, advocates, and peers who are interested in expanding their storytelling skills and using stories in new ways as they serve others.

Lunch will be provided.

6 CEUs will be provided.

To receive CE credits, participants must:

Attend the course in its entirety. Partial credit for partial attendance cannot be granted.

Sign-in and sign-out at the beginning and end of the day, respectively.

Complete and turn in an evaluation for the course.

Following successful completion of the course:

CE Certificates either will be:

Handed out at the end of the training or

E-mailed to participants within 2 weeks of the date of the training.

Stories Work! Using Stories for Helping, Community, Outreach, and Advocacy meets the qualifications for 6.0 hours of Continuing Education credit for LMFTs, LCSWs, LPCCs, and/or LEPs as required by the California Board of Behavioral Sciences.

Monterey County Behavioral Health (MCBH) is approved by the California Association of Marriage and Family Therapists to sponsor continuing education for LMFTs, LCSWs, LPCCs, and/or LEPs. MCBH {Provider Number 70472) maintains responsibility for this program/course and its content.

Interim, Inc. is the only agency in Monterey County that provides affordable housing, residential treatment, social support, homeless outreach and support, family outreach, and supported education and employment services for adults who have serious mental illnesses.

Our mission is to provide services and affordable housing supporting members of our community with mental illness in building productive and satisfying lives.

We believe that housing, healing, and hope are a path to mental health.