Out November 12th, A game-changing song against Racism, Social Media Woes and the protection of father-daughter relationship. 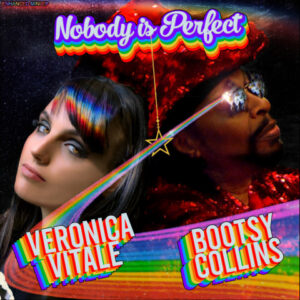 “An Evening With Silk Sonic” album and “Nobody is Perfect” dream-like ballad are coming out the same day, giving Mr. Bootsy Collins the chance to float between two worlds, and have a foot in the United States of America and Europe at the same time. Two generations bridging the gap between the past and the hyper-future.

“Silk Sonic” Resurrects Soul and generously leans into a project that calls for nostalgia and hearts and vintage vibes appeal, citing Prince, Michael Jackson, and James Brown as influences, Mars epitomizes modern soul and R&B with his sultry and smooth vocals, with funk, reggae, and Motown elements. If Anderson.Paak and Bruno Mars merged the duo’s unique sounds transporting the smooth and sultry energies of 1970s soul and 2000s R&B into 2021. 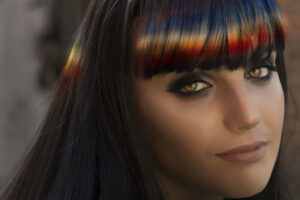 On the other hand, “Nobody is Perfect” is insurgent and ground-breaking. It’s unconventional, Avant-pop, unique and it’s something You haven’t heard before but the Music is always soothing and tuneful to the soul. Veronica Vitale takes a deep exploration into lyrics, music composition and storytelling. She doesn’t just write typical songs about love or heartbreak. Vitale touches different issues and tells many different stories with unsettling chord progressions and a passionate “genderless – liquid – fluid” music choice.

The end of Nobody is Perfect is carried by yet a second duet between Veronica Vitale and an extremely complex, artfully crafted guitar solo by Patrick J Hamilton. This closing of the track truly makes you feel like you are floating in some unknown cosmos of deep space and in the end, we return to earth with a few spoken words by Veronica. You will then realize this is deeper than just a duet but metaphorically the last letter shared between a Father and Daughter. Veronica Vitale promotes the unique idea that we should bring our entire selves into the workplace and fix the mess inherited from a generation that will go down in history for being lazy and entitled.

Being a warrior with a cause, She is aware that those born into the chaos of a post-9/11 landscape have only known survival, a state of “war” with violence auto-playing their whole lives and she wants to do something about it. The Track “Nobody is Perfect” Speaks Volume about all these elements. 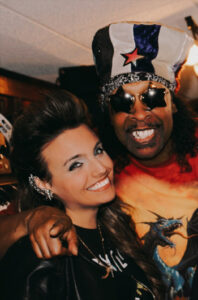 Who is Veronica Vitale?

Born in Italy and artistically grown up in the United States between Cincinnati, Ohio and Seattle Washington, ultimately moving to Atlanta, Georgia, Veronica Vitale is a piano player, music composer, film score composer and visionary producer. She has single-handedly reinvented the musical landscape since 2016, mixing disparate soundscapes into a new genre of music, uniquely its own, recording the sounds of the world herself as well. Her goal is to bridge the gap between the old school generation and the future generations to come, and if her “liquid-fluid” new approach to music wasn’t enough to stir the awareness of a more tolerant, less label-oriented generation, Vitale’s androgynous style and fierce eco-consciousness has certainly earned her credit too.

“Nobody is Perfect” comes a month after the release of spine-chilling, mind-blowing music release “TRANSPARENT” released on 24 September 2021, a song that stands against bullying and abuse of power, self-harm and suicidal thoughts, where the artist cuts her last layer of skin to turn invisible as the official music video plays-out.

“Nobody is Perfect” is another Powerful Shout out by Veronica Vitale, calling for “More Real skin” “Body Positivity” “Body Confidence And Self Esteem”, the Italian artist speaks loudly against misleading beauty filters and The Complicated Truth Behind Instagram And Body Image Woes, meanwhile she also stands against racism, fixed stereotypes and discrimination.

“We are not numbers, likes and followers, our art goes beyond all of that, our art belongs to the One,” says Veronica Vitale during an interview on Billboard.