Recording Artist from CHH community releases new music project with an approach that may surprise her fan base and provide all listeners with a new perspective of her sound.

Brooklyn, NY – USA | September 07, 2021 — Brooklyn recording artist Serious Voice is back with a stellar new project dubbed “Beautiful”, affirming women, showing the bravery it takes to accept their insecurities but stand in the strength that only they as women can bring to social issue family, and business and doing it all while singing like never.

Brigitte James known creatively as “Serious Voice”, is an award-winning artist that has been working on several projects over the last year including her talk show “Success Stories with Serious Voice” that is broadcasting in six cities nationwide with many more to come. Serious is putting the finishing touches on her documentary titled, “Rap Queen”, but Serious could not keep her music fans waiting any longer! She had to give the people what they have been waiting for, going on five years. BARS! 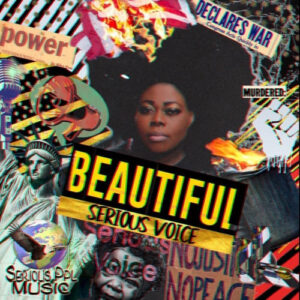 Serious has taken some of this time to perfect her craft of lyricism and is ready to present her sophomore project to the world. “Beautiful” drops on all platforms on September 9,2021 and features several talented high-octane rap queens and showcases Serious Voice in a new light.

If you were to go back and listen to Serious’ debut album Shofar you will immediately recognize the stark difference in the artist she was and the artist she has become. “I had to grow as a rapper, and I am more conscious of what’s going on around us here in this country and abroad” Serious shares. Shofar was released under her label Serious PPL Music in 2016 and executive produced by MooreBeats. Serious garnered a placement on Spike Lee’s, “She’s’ Gotta Have It” with worship song “WOAH”, toured across the country for an entire year performing “Anthem” a fan favorite off the same album.

“Beautiful” has been a labor of love and patience. With patience and determination “Serious Voice” has birthed a multi-track album that is fitting of its title “Beautiful”! This album celebrates the beauty in being a black woman. It captures the beauty in learning to love and accept yourself for exactly who God created you to be. This album celebrates the beauty there is in having faith and spirituality while trying to remain grounded in all aspects of life. 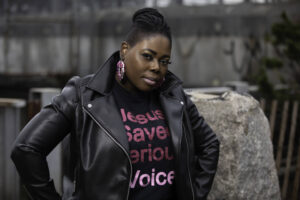 The title track “Beautiful” is an anthem that reminds us to tell one another often that you see the beauty in them, not only in the physical but in your acts of service and love. On your worse day “Beautiful” will make you look at things with a more positive attitude encouraging you to find the beauty in even the most challenging situations.

“Hear Me Roar” is a powerful collaboration between six amazing women from all different backgrounds and walks of life. This song celebrates women in a way that recognizes their strength but also allows for them to be the gentle, nurturing and emotional creatures God created women to be. The ladies go from a prospective of being the backbone of their families, acknowledging their flaws and but standing strong in their beauty.

If you are looking to add some positivity, beauty, faith, and positive self-affirmations to your playlist be sure to download “Beautiful” by Serous Voice on all platforms September 9, 2021 and join her in celebrating her project release September 11, 2021 in Richmond Hill, NY.

Band Scheduled to Perform on Letterman Day of Album Release

Los Angeles, CA, March 06, 2012 – Lukas Nelson & Promise of the Real earned themselves a stellar 2011 with gigs nearly every night, spots on such mega-events as Farm Aid, Bridge School, and Stagecoach, national TV airtime on Letterman, Leno, and Kimmel, and rave reviews for two simple reasons: Great songs and even better live shows.

Now, they’ve found a way to bring that performance experience to their second full-length release, Wasted, both lyrically and musically. “Neil Young suggested that we record the album live in the studio in analog, which is something we didn’t do on the last record,” explains Lukas Nelson, who penned all of the tracks and produced the record with his band – Anthony LoGerfo (Drums), Tato Melgar (Percussion) and Corey McCormick (Bass) – and Jim “Moose” Brown. “It really added a lot of magnetism, energy, and that live feel, and a lot of warmth to it. I feel like this record sounds more like what you get when you see us perform.”

Neil Young, whom Lukas calls a “distant mentor” for the band, also suggested that the band record on a full moon. Not only did they hit the studio – Moose Lodge Studios in Nashville – on full moons, but they also mixed and mastered the record on a full moon and purposely chose the April 3 release date because it’s yet another full moon week.

“This record was all about capturing a moment, and there are some special full moon moments that I think we captured on tape,” adds Nelson. The moments in particular that are captured on this record was the time on tour over the summer months during which Nelson wrote the album’s 14 songs in the back of the band’s tour bus.

“Wasted is a snapshot of this last summer on tour when I wrote most of this music,” he says. “It was the summer of debauchery. I was socializing a little too much and not really being true to myself. So the whole record was a snapshot of me making one of the many mistakes I’ll likely make throughout my life. There were a lot of pressures on the road and there are a lot of people who view touring as just one big party. I started staying out until 4 in the morning. It was like summer camp. It took a toll on me. I soon realized I wasn’t really being myself and I had a big wake-up call and it’s during that time that I wrote this record.”

But, Nelson is quick to add that Wasted is not just about a summer out of control; it’s about the idea of wasting your time, your life, your creativity, and reminding yourself to stay true to your values and ideals, and for Nelson and his band that’s always been about family, positivity, and spreading love and happiness to others. “There are a lot of definitions for the word wasted; it’s not a one dimensional record. It’s meant to be listened to and internalized. There is a lot of sentiments about missing loved ones and being on the road, and even some political and military hints in there,” he says of the lyrical matter.

Adds drummer Anthony LeGorfo: “It’s really a road record. We did 18 weeks straight on tour in the summer and that can kind of waste anyone. I think it’s also great to listen to while you’re driving down the road. And because Lukas wrote it at one time, I think this record is more cohesive than the last one. By being on the road together so long, we really improved as a band and got tighter and you hear that on this record. These songs are really jammy and fun to play live.”

Though Lukas Nelson & Promise of the Real didn’t stray too far from what their core sound is, they did play around with new instruments and sounds and a few new influences seeped into the music as well. For instance, the album kicks off with “The Golden Rule,” which has a bit of a calypso vibe, and includes several gritty rockers, such as “Old Familiar Pain” and “Wasted,” which Nelson admits is his “strutty Rolling Stones” song.

“We have a lot of new instruments on there that we haven’t really used before, like the Wurlitzer, the Hammond B3 organ, Dobro, and lap steel guitar… That was Moose’s influence,” says Nelson. “Moose plays on all tracks and Cowboy Eddie Long (steel guitar) on most of them. We really extended the family beyond our core four on this record”. Along with Moose, Cowboy and the rest of the core that includes Percussionist Tato Melgar and Bassist Corey McCormick, the band also brought in Lukas’ sister Amy on two songs “Wasn’t That Great?” and “Can You Hear Me Love You?”

That said, at the core of Lukas Nelson & Promise of the Real and Wasted is what their fans know and love best. Rock n Roll that speaks from the heart. “First and foremost we’re just people in a rock n roll band and this is a rock n roll record indicative of that,” adds LoGerfo.