When Teresa Sabankaya started her flower business in 1999 by growing her own assortment of boutique cut flowers, and later opened her own flower shop in Santa Cruz, precious few women were involved in growing and selling their own flowers and floral arrangements.

Bonny Doon, CA, June 11, 2019 — When Teresa Sabankaya started her flower business in 1999 by growing her own assortment of boutique cut flowers, and later opened her own flower shop in Santa Cruz, precious few women were involved in growing and selling their own flowers and floral arrangements. She is at the front of the farmer-florist movement, recognizing the importance of American Grown flowers and how to source them. 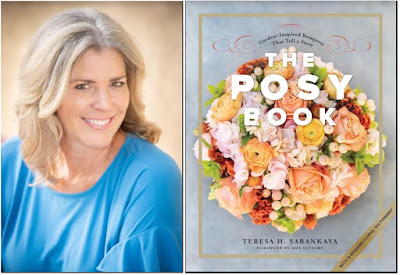 Now, 20 years later, Sabankaya is not only a renowned florist and innovative and in-demand floral designer, she is a pioneer of the Slow Flowers ™ movement, is an Advanced Certified Green Gardener, and now an author of a book on flowers.

Sabankaya’s “The Posy Book,” which was recently released on the Countryman Press imprint, explores one of her favorite topics, posies, a garden-inspired flower arrangement that conveys a message in the language of flowers.

In “The Posy Book,” Sabankaya, founder and creative director of Bonny Doon Garden Company, a full service floral design studio, Santa Cruz florist and botanical gift shop, shares what has become her signature — posies. Inspired by the Victorian-era language of flowers, Teresa’s modern-day posy is a gathering of flowers, herbs, and plants meant to convey messages such as Happy Birthday, Sympathy, Housewarming, and so much more! The Posy Book is the ultimate inspiration book, resource directory, instruction and historical reference book, and provides how-to and step by step directions on how the everyday person can use garden flowers and commercially grown cut flowers to create a modern-day floral design that uses the language of flowers to create a wide array of greetings and messages to it’s recipient.

Sabankaya and her posies have been a core part of her retail business from the beginning and have been featured in such media as CBS Sunday Morning, Romantic Homes magazine, San Francisco Chronicle, Santa Cruz Sentinel and The New York Times.

Sabankaya holds an influential position as one of the most innovative florists in the San Francisco Bay Area. Her floral designs are highly desirable due to their unique style of arranging and elegant garden appeal. Her wedding florals have been featured in numerous wedding blogs and magazines including Smitten, Sweet Violet Bride, Style Me Pretty and Green Wedding Shoes.

She has been featured in Amy Stewart’s “Flower Confidential” book as well as her blog, and was featured “like a florist from 100 years ago” in the PBS documentary “Botany of Desire,” based on Michael Pollen’s bestseller “Botany of Desire.”

Sabankaya is an instructor of floral design and can be frequently seen leading workshops and presentations about flowers in many levels. Her “Posy in your Pocket” presentations have been highly attended at the San Francisco Flower and Garden Show, the Monterey Home and Garden Expo, Filoli Estate, and many garden clubs and nurseries.

She is an Advanced Certified Green Gardener, a member of Slow Flowers ™, Great Garden Speakers, and the California State Floral Association.

She kicked off her book-signing and floral demonstration tour on May 8 at Bookshop Santa Cruz, in Santa Cruz, California.