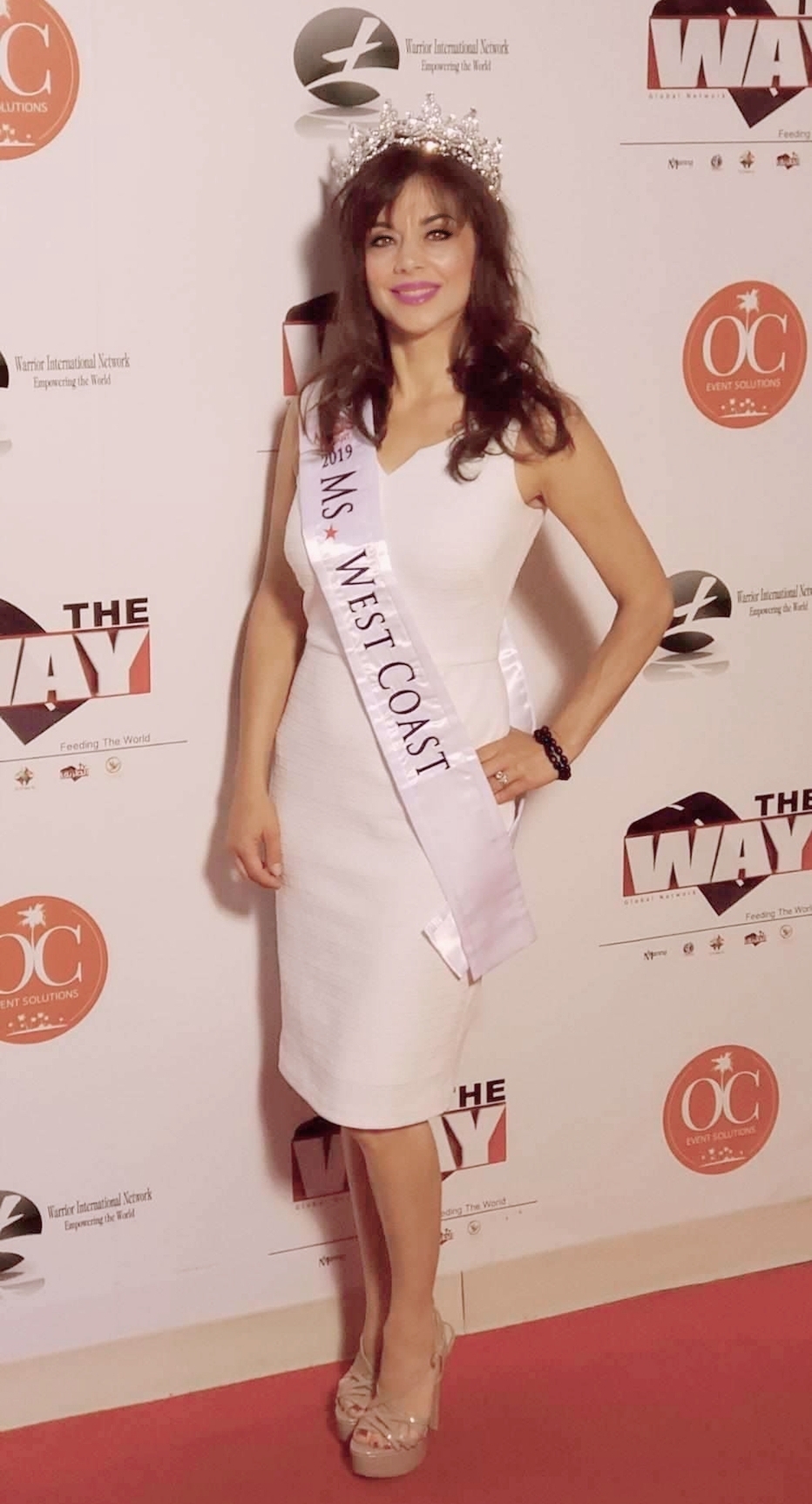 The Mission of the pageant is to celebrate the accomplishments of women, encourage them to be involved in community service, as well as use the “Crown for a Purpose” to make a difference.

The pageant is open to women 26 years of age and up who are single, divorced or married. The selection process for receiving a title was done by submitting an application, photo and followed up by an interview over the phone. Finalists from across the United States will compete in Interview, Sportswear, Evening Gown and On-Stage Interview and 4 national titles will be awarded at this year’s pageant including Ms. America®, Ms. America® International, Ms. America® Elite and Ms. International™. “Joanna Hairabedian really left a positive impression on our judges and we are thrilled to have her representing California at the 2019 Ms. America Pageant finals this August,” said Susan Jeske, Pageant CEO.

A successful career with NASA endorsed technology increasing blood flow, co-owner of (the zorb.com) providing EMF protection products; Joanna helps others with their mental, physical and spiritual journey. As a singer, songwriter and author, she loves inspiring others with her music.

Founder of the Princess Crowning Program, helping instill inner confidence to reflect outer radiance, Joanna says, “Knowing who you are on the inside can change your life on the outside and the course of your destiny.”

The Ms. America Pageant will be held on August 24, 2019 on the historic ship the Queen Mary that is permanently docked in Long Beach, California.

Tickets will go on sale in June of 2019 and you can go to the pageant website to purchase:
MsAmericaPageant.com

There will also be free LiveStreaming to watch the pageant on AlertTheGlobe.com

For more information about the Ms. America® Pageant visit the website at: MsAmericaPageant.com or Contact the CEO – Susan Jeske at 949 679-8888.

The Ms. America ® Pageant is a registered federal trademark with the USPTO in Washington DC since February 2000 and ranks as one of the top pageant trademarks in the United States.

Using her crown for a purpose to make a difference in her community and across America.

Costa Mesa, CA, USA (July 19, 2013) — Stacy Smith representing Colorado was crowned Ms. International™ 2013 on June 23 in Southern California in a contest hosted by the Ms. America® Pageant. She also received the “Woman of Distinction” award at the pageant during the Special Awards ceremony.

Ms. International™ 2013, Stacy Smith was born in San Luis Obispo on February 14th, 1983 to parents Janet Trimmer and Patrick Smith. Since Stacy could walk she has always enjoyed performing in front of an audience, beginning at home with her parents and two brothers, Ryan and Jason. Developing from this, she soon discovered her passions in life to be beauty, dance, and charity work through volunteering.

Stacy has a background of more than 20 years in performing in dance recitals throughout the world. From these experiences, she gained the confidence and maturity to progress into modeling and acting. After attending the University of Idaho and graduating with a major in Journalism Mass Media and a minor in Dance Choreography, she decided to enroll in cosmetology school. Immediately finding this the perfect fit for her, upon graduation she began to professionally apply these skills and founded in 2011 her own company, OC Hair and Makeup where she manages a team of stylists working with brides and undertaking numerous formal events. It is through this high level of artistic ability and dedication that OC Hair and Makeup http://www.OCHairandMakeup.com has been voted the #1 Beauty Service of Orange County of 2013 by theknot.com.

Throughout her community, Stacy is known as a strong leader who enjoys giving back to those around her. She has dedicated herself to her charity of choice, Parent Project Muscular Dystrophy. This lifelong commitment began at an early age as her older brother Ryan was unfortunately born with the disease, and Stacy works hard to get the community involved to raise awareness and to find a cure.

Not only does Stacy lead by example, but she is also a working mom with a four-year-old son named James, and even though she has an abundance of responsibility, she always makes time for her son to give him the love and care that he needs to grow up to be a healthy, educated individual and the best reflection of all that is good in her.

Video of crowning can be found at: http://www.youtube.com/watch?v=-BEp7UkxgoE&feature=player_embedded

About the Ms. America® and Ms. International™ Pageant
Richard Simon from Houston, Texas founded The Ms. America® Pageant in 1997. The first pageant was held on December 4, 1997 at the Luxor Hotel in Las Vegas. Contestants competed representing their state in the pageant. Susan Jeske from Colorado was crowned the first Ms. America® – http://www.SusanJeske.com. Ms. Jeske became the owner of the pageant in 1999. The pageant is for women 26 years of age and up who are single, divorced or married and is a registered federal trademark with the USPTO in Washington DC since February 2000. The pageant was created to empower women across the nation, celebrate their accomplishments, encourage involvement in community service, honor and advance the status of women and to use the “crown for a purpose” to make a difference across the nation and around the world. For more information visit: http://www.MsAmericaPageant.com.

State and regional titleholders from across the United States competed in four categories including interview, sportswear, evening gown and on-stage question.

Ms. America® 2013, Chiniqua Pettaway walked across the stage to accept the crown marked her first steps on a journey that will take her from spotlight to spotlight representing the American woman 26 years of age and up who are single, divorced, widowed or married.

Ms. Pettaway, a Houston, Texas transplant, is originally from Richmond, Virginia. She is an entrepreneur, model, fitness instructor and community leader. Chiniqua owns and operates six income tax preparation offices in Houston, TX. She is currently working on her master’s degree in Industrial Organizational Psychology and will complete her degree from Argosy University in March 2014.

A philanthropist, Ms. America® 2013, Chiniqua Pettaway is also a philanthropist and is especially passionate about her platform of service “Guard a Heart” a heart health awareness foundation. Guard a Heart’s mission is to fight heart disease with their campaign, “Know your Risk, Save a Life.” Heart conditions are the number-one killer of men and women in America. She enjoys traveling, dancing and mentoring young women through her platform and other community involvement.

As Ms. America® 2013, Pettaway is honored to represent an organization that enriches the lives of women across the country and is passionate about continuing to give back to others through philanthropic endeavors and being the inspiration that helps others achieve their dreams.

Ms. America International® 2013, for women 40 years of age and up went to Robin Griffin, Ms. California Coast. Ms. International™ 2013, the “Judges and People’s Choice Award” went to Stacy Smith, Ms. Colorado. This prestigious title must not only represent the pageant but also the Ms. America® fans as well. Stacy Smith was chosen by receiving the most votes online, good luck wish ads and scores from the Judges.

Richard Simon from Houston, Texas founded The Ms. America® Pageant in 1997. The first pageant was held on December 4, 1997 at the Luxor Hotel in Las Vegas. Contestants competed representing their state in the pageant. Susan Jeske from Colorado was crowned the first Ms. America®. Ms. Jeske became the owner of the pageant in 1999.

Video of crowning can be found at: http://www.youtube.com/watch?v=hQ6xchdaDHM

About Ms. America Pageant
The Ms. America® Pageant is open to women 26 years of age and up – single, divorced or married who are articulate, interesting, elegant and classy. Pageant competition is based on Fashion wear, Interview, Evening Gown, Sportswear and on-stage question. The Ms. America® Pageant was created to empower women across the nation, celebrate their accomplishments, encourage involvement in community service, to use the “crown for a purpose” to make a difference and to promote, honor and advance the status of women. The Ms. America® Pageant is a registered federal trademark with the USPTO in Washington DC since February 2000 and is one of the top pageant trademarks in the world. Visit http://www.MsAmericaPageant.com for more information. Facebook: http://www.Facebook.com/MsAmericaPageant.