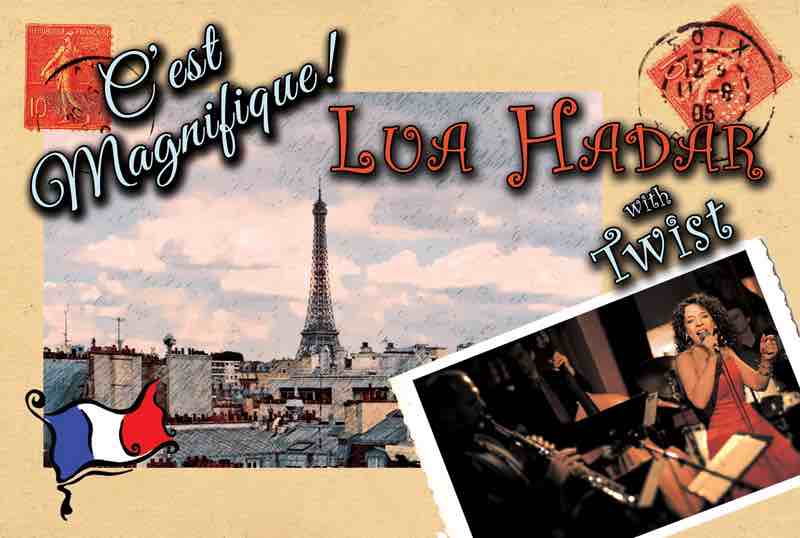 The show presents a variety of songs from the popular traditions of Paris, including those of American songwriter Cole Porter; hence the title “C’est Magnifique!” a song from Cole Porter’s 1953 musical, Can-Can.

Dave Sturdevant’s harmonica brings a Toots Thielemans-style to the show, in addition to the gypsy sound of his swinging guitar. 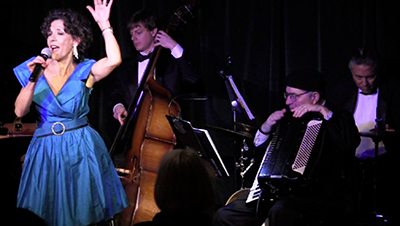 French songs by Charles Trenet, Maxime LeForestier, Edith Piaf and Serge Gainsbourg round out the set list, and as ever, Lua’s fun and quirky stories provide her personalized bridge to the songs, whether you speak French or not.

Hadar is no stranger to France or French music, having just returned from teaching a master class in France on American Jazz Standards.

ABOUT TWIST:
Since its inception in 2007, Hadar’s cosmopolitan jazz ensemble TWIST has developed a multi-lingual world jazz fusion that twists the styles of international standards and brings new material into the jazz idiom.

Lua has charmed audiences from New York’s Iridium Jazz Club to Bangkok’s Thailand Cultural Center to the Swan Bar in Paris, where, on a return engagement, she previewed “C’est Magnifique!” to an enthusiastic full house before bringing it to San Francisco’s Society Cabaret for its first run in November 2013. The show was reprised last year and became a Society Cabaret tradition, presented each time with a different featured instrumentalist.

Hadar has released three CDs with Music Director Jason Martineau and Twist. The most recent, “Like A Bridge,” was recorded in 2012 as the centerpiece of her Bridges Project. The “Like A Bridge” DVD was nominated for an Independent Music Award and was released at Yoshi’s Jazz Club in Oakland in September of 2013 after its premiere at San Francisco’s Historic Balboa Theater.

“…such a lovely variety of songs from cabaret traditions of Paris (and beyond), that we might as well have been in a brick-walled basement room in the Quartier Latin.” – Talkin’ Broadway

ABOUT THE HOTEL REX AND SOCIETY CABARET:
The Hotel Rex is San Francisco’s answer to New York’s legendary Algonquin Hotel, located at 562 Sutter Street between Powell and Mason. Surrounded by 1920’s and 30’s style artwork and glamour, guests can linger in the Library Bar for cocktails and conversation. A menu of American classics with a European influence is available in the cabaret room as small plates or dinner. Society Cabaret patrons are immersed in an ambiance of arts and culture, in a true cabaret setting. Society Cabaret has received acclaim from the San Francisco Mayor’s Office and has expanded this year with venues in San Diego and San José. (http://societycabaret.com)