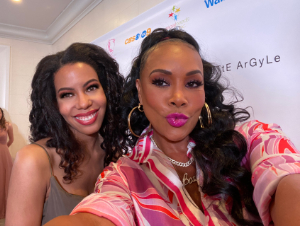 Los Angeles, CA , USA, 2022-May-23 — /REAL TIME PRESS RELEASE/ — Is there a new project in the works? Vivica A. Fox is an American actress, businesswoman, and international brand. She has been involved in the entertainment industry since 1983. She has been called “the most successful black woman in Hollywood.” She has starred in films like “Kill Bill: Volume 1”, “Kill Bill: Volume 2”, “Independence Day” and “Kingdom Come.” She is also a supporter of women’s empowerment and has been a part of many campaigns to promote female entrepreneurship.

Camille Calvin is a multitalented actress and a new comer to the industry who has proven her abilities through her versatile roles in numerous films and T.V shows. Camille Calvin played the leading role in the cheer movie, Deadly Cheers, released on lifetime in Jan 2022. Her fans and friends always admire her for changing her looks and personality and showing a new face, according to the script and character and nailing it.

on May 15, 2022 at the Beverly Hilton Hotel Both Vivica A. Fox and Camille Calvin appeared on the red carpet at the Pink Pump Affairs. Looking like both of them are on the same page. Vivica A. Fox has produced many cheer films for lifetime and now again has worked as the executive director of six new cheers films, including “The wrong cheer Captain,” “Killer Cheer,” “Pom Poms and Payback,” “Deadly Cheers,” “Cheer for Your Life,” and “Webcam Cheerleaders.”

Camille Calvin plays the role of Brianna in the Deadly Cheers movie, a single mom who is excited to be the new assistant principal of the High School in the film. Things get worse when a cheerleader accidentally dies, and then the coach wants to save his reputation even by sacrificing all the other cheerleaders. This is a dramatic and suspenseful film.

They both attended the pink pump affairs to support the event and boost women’s empowerment. A pink pump affair is an event that has taken place in Los Angeles every year for the last fourteen years. It is a gathering of influencers and women entrepreneurs who are invited to attend the event for the purpose of empowering women and promoting gender equality. The Pink Pump Affair aims to create a space where women can come together and share their stories, struggles, and success stories with one another.

As Vivica A. Fox has been producing various films for a lifetime. Camille Calvin recently played a leading role in “Deadly cheers” inspiring the audience and industry. They might be looking forward to having another collaboration in the future.