Daryl Guberman & Guberman-PMC have been the leading force in trying to expose the anti-American ties of some of the leading organizations of Quality Registrars. To celebrate these efforts Guberman is offering a “Make American Great Again” hat to supporters of his YouTube channel and work.

New York, NY, USA, December 24, 2018 — The idea that quality in American industries should be looked over by American companies and not ones with direct ties to America’s outspoken enemies shouldn’t be hard to understand. Despite this, the passionate pro-American Daryl Guberman> founder and CEO of Guberman-PMC have had to make it his personal mission to shed light in this area both offline and through using YouTube as a medium to help educate the industry. In a recent YouTube video driving home this pro-American message, Guberman has even offered a free #MAGA, while supplies last, to whoever calls in at 203-556-1493 or sends an email to ceo@dguberman.com to express support.

“It’s underhanded and irresponsible that these international organizations (ANSI-ASQ national accreditation board (ANAB) & China-led IAF) responsible for quality would have members of clear ties to countries hostile to America as well as to Israel,” remarked Guberman passionately. “We are an American company, who employs as many veterans as possible. So the idea of giving out free #MAGA hats came to me since we truly want to be part of the process of making America great again.”

Counted among the countries involved with the registrars Guberman is exposing in this most recent video and his many past YouTube videos aimed at business owners include China, Iran, Pakistan, and North Korea. Depending on the industry the quality is being checked for, any normal person could reasonably see where foreign ties like this are a potential danger to both the American companies using these registrars and to America itself, according to Guberman. 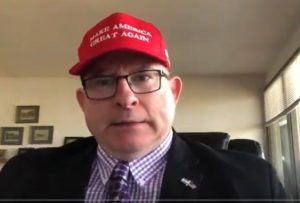 Of course another option is open to businesses who also believe in America. Having their quality needs met by a company like Guberman-PMC, who are based in America, owned and operated by a patriotic CEO and deliver vast experience with the ability to cover a wide range of industries.

When asked if he thought the #MAGA hats would offend some people, Guberman replied, “Good. We don’t want to do work with people who have no problem supporting America’s enemies, or dedicated our time, energy, and good will to working with socialists, communists, and whatever other snowflakes who would be troubled by the idea of Make America Great Again.”

In an age where businesses rarely operate fueled by sound and transparent clear principles, Daryl Guberman and Guberman-PMC are clearly setting a courageous example to anyone who should notice.

The #MAGA hats are completely free, with Guberman-PMC even covering shipping, with a maximum of one hat per person, and limited supplies only being stocked, which could go fast.