Washington, D.C. – USA, October 4, 2019 — American Edward Peng was arrested in California for possibly spying for the People’s Republic of China, the Justice Department and FBI announced Monday. Peng was arrested after a sting operation in which he received what he believed to be classified information that was actually provided by a source working for the U.S. government.

According to U.S. Senate candidate Daryl Guberman, CEO of Guberman-PMC (http://www.dguberman.com) Peng’s arrest is an alarming example of China’s vast spy ring throughout the country which has expanded significantly shortly after a Chinese national took over the leadership role of the International Accreditation Forum (IAF), the oversight body of the ANSI National Accreditation Board (ANAB). See https://youtu.be/5iO58SnnDkE

For nearly five years Guberman had been calling for the Feds to investigate the China-led organization (IAF) which is shockingly over-seeing thousands of U.S. corporations as well as numerous government agencies risking the theft of potentially critical data associated with military, diplomatic, technology and national security of the United States. Incorporated in Delaware, the International Accreditation Forum (IAF) is under the leadership of Chinese national Xiao Jianhua.

Guberman said he fears classified information is increasingly at risk due to IAF’s over-sight programs on government agencies as well as its access to commercial technology, intellectual property, and personal data on millions of American citizens through its global network of certification bodies, some of which based in Iran, Palestine and other countries hostile to the United States and its allies, particularly Israel.

As the oversight body for the ANSI-ANAB Accreditation Board, IAF oversees some of America’s largest corporations, including Lockheed Martin, the leading manufacturer of military weapons and equipment. Reportedly, Lockeed Martin employee Lisa Gross was recently caught demanding certification bodies to be “accredited” by China-led IAF in order for a manufacturer to qualify for sub-contracting work with the aerospace giant. Lockheed has long been known for its anti-competitive practices and monopolization.

The 56-year-old Peng, allegedly dropped money and picked up classified information at hotel rooms in Georgia, Ohio, New Jersey, and California. The suspect’s alleged ties to IAF’s Chief Executive Xiao Jianhua is unknown at this time. Jianhua is a native of Beijing and like all Chinese citizens is under control of the Chinese government.

“Through association with ANSI-ANAB, the China-led organization (IAF) likely has access to potentially critical data on U.S. government agencies, including the Department of Commerce (NIST), Homeland Security, and the FBI said Guberman.  He added, “The American people are appalled to learn The FBI’s forensic labs are audited and inspected by the ANSI National Accreditation Board (ANAB) which is a sitting member of Communist-led IAF.”

Guberman has been dubbed the ‘savior of American quality’ particularly in the manufacturing sector because of his company’s decision to remain independent from the International Accreditation Forum (IAF). Guberman and supporters are fundamentally committed to bring back manufacturing to the United States, and provide quality oversight without interference from foreign-led entities with anti-American interests such as IAF.

In recent years the leadership of ANSI-ANAB reached out to Guberman in attempt to oversee his nationally leading registrar G-PMC, Group (http://www.g-pmc.com). Guberman said he declined the offer because of ANSI-ANAB’s relationship with China-led International Accreditation Forum (IAF) and its defiance of Israel. Guberman is Jewish and known in the political world for his outspoken pro-American views.

“Undoubtedly, China’s extensive spy network will continue to spread like a cancer across the country as organizations such as IAF are allowed to operate unchecked while our own government turns its back on the American people by allowing foreign-run organizations to over-see quality matters associated with federal contracts, manufacturing, military, technology, food safety, and most importantly national security” said Guberman.

The lack of ethics of ANSI is on full display and moves beyond the association’s links to hostile to the United State’s interest countries. Guberman-PMC shares in a new YouTube video how one ANSI Board Members makes over $350,000 a year, for not even one full day of work in a week.

New York, NY – USA, September 13, 2019 — Daryl Guberman, CEO and Founder of Quality Consulting firm Guberman-PMC has made it his mission to bring ethics, professionalism and patriotism to the American quality and standards world. This has put him at odds with the American National Standards Institute (ANSI) for a number of different reasons. The most recent is discussed in his latest YouTube video, where the unethical (if not criminal) “royalty” payments to ANSI Board Member Russ Chaney are explored. The new video is titled “ANSI Board Member Russ Chaney Paid $346,500 Annually for 2 Hours Work Per Week” and has immediately become a hot topic in the world of companies who use Quality and Standards registrars.

“No one can convince a normal, hardworking, American that anyone should make over $345,000 a year for two hours a week work,” commented Guberman, a true authority in the Quality field. “Especially in Quality where there is an expectation to be honest and responsible since the services being provided are so vitally important.” 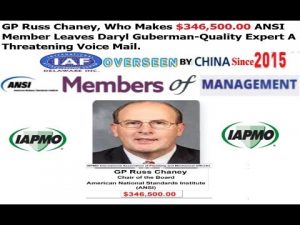 Even more shockingly, despite the ridiculous amount of money being made by ANSI board members, the companies who turn to them for Quality certifications in the last few years have seen failure after failure. This certainly gives the impression that ANSI is simply in it for the money and not even concerned with doing a good job or appearing to do a good job.

Guberman hopes that by telling the world ANSI’s secrets that this will help break up their near monopoly, something which would do wonders for US companies in both performance and in their security. Another area where ANSI fails due to their close work with Chinese, Arab and other rivals of the United States and Israel.

For more information or to schedule an appointment, be sure to visit http://dguberman.com.

ANSI drops to new low insulting normal working people and those who love America, by paying Board Members outrageous amounts of money for next to no work.

New York, NY – USA, September 9, 2019 — It is an unarguable fact that quality certification association ANSI’s board members make jaw-dropping amounts of money, that they don’t even pay taxes on, working just two hours a week. The association has tried to keep this concealed but Quality Expert Daryl Guberman has done his utmost to raise awareness of these troubling facts. Using YouTube as a platform to continue to break down the long list of issues with ANSI, and why the association is very likely not just unethical when it comes to finances but also a national security threat, Guberman is doing his best to make quality registrars trustworthy again. Guberman’s new video, “How ANSI Ripoffs Taxpayers To Pay Board Members Millions” backs up all these assertions with facts that can be easily confirmed.

“A look at the tax reports for 2016 shows how ANSI gives their board members royalty payments, which are not taxable and amounting to many hundreds of thousands of dollars each for only two hours of work a week,” remarked Guberman. “This is enough to make a person’s skin crawl who cares about America and the quality standards and companies are held to. We can only guess why they aren’t being investigated.”

ANSI are so arrogant people in their inner circle have even openly called the royalty payments they give themselves as “money laundering”. As disturbing as this already is, Guberman also reminds viewers of the new video how deeply entwined ANSI is with China, and a long list of other openly anti-American states and nationals. 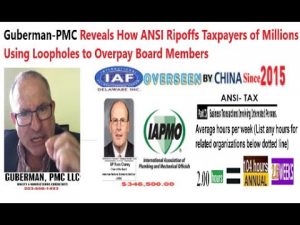 Guberman, founder and CEO of Quality Certification experts Guberman-PMC, is the complete opposite of ANSI and related efforts like ANAB anf the IAF. Guberman is a proud Jewish-American who supports the President in the need to Make America Great Again and recognizes working with countries who oppose Israel is also a terrible idea for American patriots.  Guberman has led, and will continue to lead, the campaign to educate which Quality Registrars can be trusted and which should be avoided.

Expect the videos from Guberman and Guberman-PMC to stay on schedule as he shares his voice and experience in the field of Quality to a growing audience. Anyone with question or questions, or who would like to bring Guberman-PMC on board for Quality Consulting, is encouraged to contact the firm at any time.