Washington, DC (USA), January 22, 2018 — Thousands of companies across the country certified to ISO standards are increasingly learning their quality system over-seen by China-led International Accreditation Forum (IAF) is not sitting well with many Americans, particularly military veterans, conservative lawmakers and a growing band of patriotic citizens. Ignoring the problem has proven to be a costly mistake for many businesses.

The American Manufacturing Network (http://www.mfgpartners.net) promises to unveil hundreds of U.S. companies found to have its quality certification overseen by China-led IAF. The trade group plans to unmask the scheme to the the American public by calling out individual companies and their leadership one-by-one.

“American businesses willingly allowing its quality management system to be certified by a registrar associated with the China-led International Accreditation Forum (IAF) must be exposed for what many are calling Anti-American business practices,” said Richard Milton, spokesman for the American Board of Accredited Certifications (ABAC) at http://www.aboac.org.

Studies shows the majority of businesses in the United States certified to ISO standards is unaware their registrar’s accreditation body, ANSI-ASQ National Accreditation Board (ANAB) is discreetly over-seen by China-led IAF, which is under the leadership of Chinese national Xiao Jianhua who serves as the current Chairman and Director of the organization according to tax records at http://dguberman.com/IAF_Tax_Form.pdf

With over 50% of ISO registrars in the United States accredited by ANAB, it could mean thousands of businesses across the country are unknowingly under the watchful eye of Mr. Jianhua and his Chinese agents in Beijing, the capital of the People’s Republic of China. Daryl Guberman, candidate for U.S. Senate (I-CT) released a video recording on the matter in effort to inform businesses unaware of their registrar being under the oversight and influence of China at https://youtu.be/IZDq-f7Unug 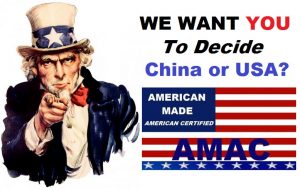 Research has shown the International Accreditation Forum (IAF) is heavily persuaded by foreign entities in countries less than friendly with the United States, including Iran and previously North Korea. An investigation showed China-led IAF, the oversight body for ANAB, allowed North Korea membership for 6 years, risking the theft of intellectual property to a threatening regime. Equally troubling, Libya became an IAF member during the dictatorship of Muammar Gaddafi. The matter remains under investigation.

Guberman was first to raise questions about the colluding relationship between IAF and ANAB and its violations of U.S. sanctions. “The accreditation scheme conjured up between China-led International Accreditation Forum (IAF) and the ANSI-ASQ National Accreditation Board (ANAB) is misguiding U.S. businesses certified to ISO standards by providing a channel for foreign oversight bodies to gain access to quality reports, audits and annual surveillance performed by US-based registration companies accredited by ANAB and its sister organization China-led IAF,” said Guberman.

Despite ANAB’s claims of being “independent” from China-led IAF, both organizations remain under the leadership of the same individuals in the United States and China, and share the same physical address on state tax records. Guberman said although IAF is incorporated in Delaware, the organization is clearly under the leadership and guidance of Chinese national Xiao Jianhua and his business associates in China.

As an increasingly likely candidate for U.S. Senate, Guberman is currently in talks with the Federal Trade Commission and State Department calling for authorities to investigate both IAF and ANAB for allegedly violating U.S. sanctions and engaging in questionable business practices, according to reports. See http://bit.ly/2mG9JwU

“American businesses certified to ISO standards need to decide if they want to be over-seen and accredited by a China-led organization, or an accreditation body of the United States,” said Guberman. He concluded, “Veterans and the American people are quickly discovering where the loyalty of these businesses stand when it comes to U.S. or China oversight of their quality management system.”

“Boycotting U.S. businesses knowingly and shamelessly under the oversight of China-led IAF and its accomplice ANAB is necessary to bring attention to such a critical matter,” said Donald LaBelle, Founder of VOB9009 (http://www.vob9009.com), the country’s leading certification program for Veteran-owned businesses. He added, “American companies whether certified or not certified to quality standards should always put the interests of the American people first by ensuring their quality management certificate is issued and accredited by a US-based organization completely independent of foreign oversight bodies masquerading as American.”

The outspoken rock star Ted Nugent understands the importance of putting America first. “China, Iran and North Korea (all members of International Accreditation Forum) spit in America’s face. They have no respect for America, and they sure as hell have no fear of America,” said Nugent.

No matter where a business owner in the United States stands on the matter, one thing appears to be evident, the ISO certification marketplace in the United States is going to see significant changes in 2018, and the battle between American patriots and liberal organizations over-seen by China is about to explode into a frenzy within the quality community, said Richard Milton.