The relationship between China and America is far from a good one, with trade wars, news of Chinese hacking attempts available and much more occurring daily. This would make it seem strange to have a Chinese national looking over ISO quality for US businesses. But this is exactly what is happening, against an outcry from US veterans led by Daryl Guberman.

New York, NY, USA, November 12, 2018 — Many experts agree China is probably the biggest threat that the United States faces both now and well into the future. With their President recently named “Leader for Life”, a massive nuclear arsenal, huge army, and ever expanding network of state-sponsored cybercriminals, the country looks more aggressive and hostile nearly every day. While President Trump has worked hard to balance the two country’s relationship to a more agreeable situation for the American economy and worker, some American businesses are completely lost when it comes to China. Having no idea just who it is who is issuing their ISO quality certifications and having access to all of their business’s internal information – the Chinese themselves! The good news is Daryl Guberman, CEO of Guberman PMC, LLC, and a growing group of US Veterans is doing their best to educate about the issue using Guberman’s growing following on YouTube to help spread the word. Recently, Guberman released a new video on the subject that should serve to open the eyes of many US businesses who are either being deceived about where their ISO certifications are coming from, or are acting with a complete lack of ethics. The video is titled, “US Veterans Warning Businesses About ISO Certificates Overseen By China”, and runs under five minutes so it doesn’t take a great time investment to view, but completely makes his and US veterans’ points clear on this important and timely subject.

“It’s not hard to understand why our veterans would feel so strongly after serving in the interest of freedom and love for their country, only to find out businesses slap them in the face like this by working with our national rivals or even enemies,” commented Guberman. “Beyond these wretched ISO-certification organizations being led by a Chinese national, they also have insider their associations ties with some of the other most American and Israel hating countries on the planet. Places like Iran, Pakistan, and the list goes on and on. Everyone BUT Israel, of course, a staunch ally of America and the only democracy in the middle east. To sum it up it’s quite shameful to do be certified by these kind of ISO groups and depending on the industry the business is in, doing so could be an actual serious security risk.” 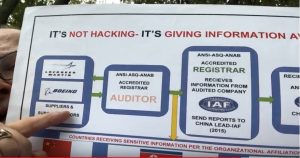 Just to show this is no paranoid fantasy, recently American Defense Contractor Lockhead Martin had to receive “a final regulatory approval from China” before they were allowed to close on its $9 billion acquisition of Sikorsky Aircraft from United Technologies, who produce attack helicopters derivative of the famous UH-60 Blackhawk. See: http://dguberman.com/CHINA_APPROVES_SALE_OF_SIKORSKY_2018.pdf. It would seem that China having any kind of a say in a decision that affects American national security when many military analysts warn a US/China war may be inevitable in the next decade is mind boggling. Or that China decides by issuing ISO certificates what is “quality” and “safe” when the things being looked at may be used by American service men or women See China takes F 35 information 2009 http://www.cnn.com/2009/US/04/21/pentagon.hacked/index.html

For those companies who wish to make a change in where they get their ISO certifications, or new businesses who need to fulfill this need Guberman-PMC offers these services covering a vast array of areas. The business is run by a proud, patriotic Jewish-American and goes above and beyond to hire veterans whenever possible.

For more information be sure to visit http://dguberman.com.